Skin mechanics and its role in manipulation and perception

During object interaction and tactile perception, our fingertips undergo complex time-varying mechanical deformations that are shaped by the mechanics and geometries of the skin tissues, bones, and nails, and the interacting objects or surfaces. The resulting strain pattern in turn excite different populations of mechanoreceptors in the skin. The precise spiking responses ofthese afferents are then transmitted to and interpreted by the central nervous system to generate an adequate motor response or give rise to a particular tactile percept. Therefore, a precise quantification of the strains and stresses taking place during tactile interactions can shed light on the information provided by the sense of touch and the mechanisms used by the central nervous system that underlie object manipulation and perception.

This workshop gathers a panel of experts who have brought novel insights on the connection between skin mechanics and object manipulation or tactile perception, and will highlight the many recent advances that have been made in understanding the mechanical properties of the skin and how these affect neural responses and behavior. 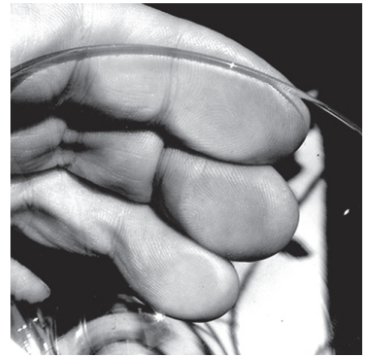 If you want to share your work by presenting a poster at the workshop, please e-mail one of the organizers (e-mails addresses are below).

Program at a glance

1:30 - 2:00 - Contact evolution of dry and hydrated fingertips at initial touch.

2:00 - 2:30 - Combining kinesthetic and tactile information for perception, action, and adaptation in fine manipulation.

The human skin is composed of several layers of tissues with different mechanical properties and complex morphology. Due to the technical difficulties of measuring these aspects in vivo, little is known about the biomechanics of the skin beneath its immediate surface, especially in dynamic conditions. We explore the use of Optical Coherence Tomography (OCT) to image the fingertip skin’s internal morphology during natural interaction with objects. In particular, by tracking how dynamic contact events propagate into deeper layers of the skin, we investigate the nature and function of skin morphology in encoding tactile stimuli.


Touch can Discriminate Direction at the Microscale

Recent studies have shown that humans could tactually discriminate nanoscale gratings. In this talk, we will see that periodic features smaller than a single skin cell can not only be discriminated by their size but also by their direction. The concurrence of multiple phenomena, including adhesive and interlocking frictions as well as viscoelastic stiffening of the stratum corneum, is investigated to explain such perceptual feat.

Contact forces naturally arise as humans perform everyday haptic interactions such as sliding the fingers along a surface to feel for bumps, sticky regions, or other irregularities. Several mechanisms are possible for how the forces on the skin could be represented and integrated in such interactions. We explore how normal and tangential force components are weighted by touch to inform the perception of haptic contact.

We developed a simple mass-spring model that can represent with some fidelity how mechanical waves propagate in glabrous skin. This model was coupled to a bifurcating neurone model augmented with a term to account for the stochasticity of the biophysics of transduction and convolved it with a kernel representing the transformation to post-synaptic potentials. Using brief inputs that model the mechanics of extremities contacting objects or sliding on them, the model showed the dramatic impact of skin dynamics on the information contained in the neural messages available to the brain.


Contact evolution of dry and hydrated fingertips at initial touch.

Pressing the fingertips into surfaces causes skin deformations that enable humans to grip objects and sense their physical properties. This process involves intricate finger geometry, non-uniform tissue properties, and moisture, complicating the underlying contact mechanics. In this talk, I will present our work where we explore the initial contact evolution of dry and hydrated fingers to isolate the roles of governing physical factors. Two participants gradually pressed an index finger on a glass surface under three moisture conditions: dry, water-hydrated, and glycerin-hydrated. Gross and real contact area were optically measured over time, revealing that glycerin hydration produced strikingly higher real contact area, while gross contact area was similar for all conditions. To elucidate the causes for this phenomenon, we investigated the combined effects of tissue elasticity, skin-surface friction, and fingerprint ridges on contact area using simulation. Our analyses show the dominant influence of elastic modulus over friction and an unusual contact phenomenon, which we call friction-induced hinging.


Combining kinesthetic and tactile information for perception, action, and adaptation in fine manipulation.

In many scenarios of object manipulation, we must concurrently control and sense position and force for perception, such as when assessing the stiffness of an object, and for action, such as when controlling tool manipulation and grip forces. There are two kinds of force sensing modalities in our body – kinesthetic and tactile. For example, when cutting with a scalpel, kinesthetic force information is sensed via the tendons and tactile information is sensed via the skin at the interface with the scalpel. In the last decade, significant progress was made in the development of devices for artificial tactile stimulation to the finger pads. These devices cause compelling illusions of augmented mechanical properties and are used successfully to guide action. In this talk, I will discuss our recent behavioral results in the search for understanding kinesthetic and tactile information integration in: (1) perception, (2) control of manipulation and grip forces, and (3) motor adaptation.

We have recently demonstrated that a lateral movement as small as 0.2 - 0.5 mm of a contacted surface relative to the rigid nail-phalangeal bone complex is sufficient to enable perception of surface slipperiness. This fact may also explain why the ability to differentiate the slipperiness of two surfaces just by touching them, like when gripping an object, deteriorates when movement is constrained to a straight path. Whether this would apply to object manipulation is not known. We investigated differences in grip force adjustments to friction between natural reach-and-grip movements and when finger movement was constrained to a straight path when making contact with an object before lifting it. We found that grip force adjustments to friction under movement constraint deteriorated.


The patterns of skin deformation that encode friction.

Having a secured grip on an object fundamentally depends on controlling the amount of frictional force. Our sensorimotor system excels at estimating the frictional strength of the contact to anticipate the object’s slippage, which in turn enables our remarkable dexterity. But how the tactile information about the state of friction is encoded within the mechanical deformation of the fingertips? Using a new setup that can image and modify friction in real-time, we show using that the skin undergoes specific patterns of deformation from the moment the skin first enters in contact with a surface all the way to sliding. The presence of these patterns of deformations is confirmed by a parsimonious model of the skin which captures the interplay of the visco-elastic nature of the skin and the frictional boundary layer. Our finding suggests that the perceptual system uses these patterns of deformation as matched filters to rapidly estimate the frictional state, independently of knowing whether the contact has a large or small amount of friction.

Humans can quickly adjust their grip force to a change in friction during manipulation. To do so, they rely on the feedback of the mechanoreceptive afferents innervating the fingertip skin and encoding skin deformation. To better characterize the underlying sensory events, we asked human participants to perform a grip-lifting task with a manipulandum equipped with an optical imaging system enabling to monitor fingertip skin strains. We observed that, following an unexpected change in friction across trials, participants quickly adapted their grip force. By comparing the strain patterns when unexpectedly switching from a high to a low friction condition, an increase in skin strain inside the contact area arising over 100ms before the motor response, suggesting that local strain patterns before lift-off are used in the nervous system to adjust the grip force.


Influence of tissue anisotropy on fingertip deformation at the location of tactile mechanoreceptors.


Finger Contact during Pressing and Sliding on a Glass Plate.


Please reach out to us if you want to present a poster!!!!!

Dr David Gueorguiev received a BS in Physics from the Free University of Brussels (2008), a MSc in computational Neuroscience from the Cogmaster Paris (2011), and a PhD in Biomedical Science (2016) from UCLouvain. He is currently a CNRS researcher at the Institute of Intelligent Systems and Robotics of Sorbonne Université and a research scientist at the Haptic Intelligence department of MPI-IS. His main scientific interests are haptics and neuroscience. His current research includes haptic rendering, localized haptic feedback, and multisensory perceptual illusions.

Dr Delhaye received a BS degree in engineering (2007), MS degree in electro-mechanical engineering (2009), and PhD degree in applied science (2014) from the Université catholique de Louvain, Belgium. He was a postdoc scholar at the University of Chicago from 2015 to 2018 and is now a research associate at UCLouvain. His research interest includes neuroprosthetics, haptics and neuroscience in the context of touch and sensory-motor control.

Michaël Wiertlewski is Assistant Professor at the Cognitive Robotics Department of the TU Delft in the Netherlands. He obtained his Ph.D. degree at Sorbonne University. In 2012, he joined the Neuroscience and Robotics (NxR) lab at Northwestern University in Evanston, IL, USA, where he studied the physics of ultrasonic friction-modulation. From 2015 to 2019 he was CNRS Chargé de Recherche at Aix-Marseille university. He now leads the Tactile Machines Laboratory, which research interest include the design of tactile interfaces, the physics of the skin/surface interaction and human and robotic tactile perception.

Laurence Willemet is a postdoctoral researcher at the Cognitive Robotics Department of the TU Delft. She received her MS degree in 2017 in technology applied to health in Strasbourg in France. She obtained her PhD degree in 2021 with Aix-Marseille Université in France. She is mainly interested in how humans regulate grasping forces when they interact with rubbery or slippery objects, in the quest of finding a compact representation of the skin deformation that allows human dexterity. She believes that finding the primitives of touch is key to enable dexterous manipulation in soft robots.

Stephen Redmond is Associate Professor at the School of Electrical and Electronic Engineering at University College Dublin (UCD). He was previously an Associate Professor at the Graduate School of Biomedical Engineering at The University of New South Wales (UNSW), Sydney, Australia, where he spent 10 years. He completed a Bachelor of (Electronic) Engineering at UCD in 2002 and PhD in biosignal processing at the same institute in 2006 on the topic of at-home sleep staging. In 2018, he returned to UCD to lead a Science Foundation Ireland President of Ireland Future Research Leaders program on the topic of tactile sensing. He is a co-founder of tactile sensor company, Contactile. He is also Data & Insights Director at Irish med-tech start-up FIRE1. His research interests span a broad range of topics in biomedical engineering where the signal processing techniques can be applied.

David Córdova Bulens is a postdoctoral researcher at the Biomedical Signals and Sensors group at University College Dublin. He received his MS degree in 2013 in electro-mechanical engineering and his PhD degree in 2017 at UCLouvain in Belgium. His work focuses on two aspects: on the one hand, he is interested in how tactile feedback enables humans to regulate grasping forces, looking for relationships between skin deformations and grip force adjustments. On the other hand, he works on developing tactile sensors for use in robotics and prosthetics applications.